Days before the Philippine election, Iglesia Ni Cristo (INC) leaders usually endorse candidates to their members. And members should strictly vote for said candidates, without asking for the basis of the selection of the candidates, so that INC will achieve what they called, “Unity Vote”.

But for Non-INC members, like me, questions such as, “why these candidates?” or “what will INC get in return by endorsing those candidates?”, would certainly be asked. We may not get direct answers from INC’s leaders but we can review the actions of the endorsed candidates who won the election. So, let me give you one observation. 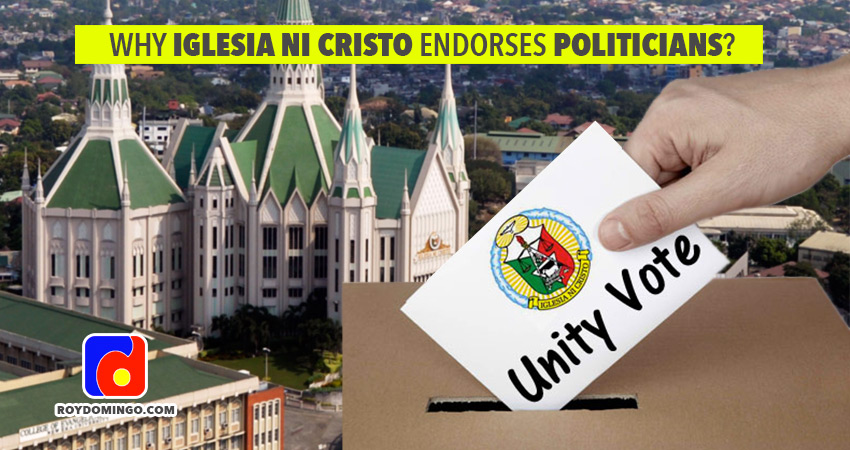 During the 2004 election, INC endorses presidential candidate, Gloria Macapagal-Arroyo (GMA), who eventually won the said election. And in 2007 election, senatorial candidate, Miguel Zubiri, was endorsed by INC. Luckily, Zubiri won the last seat of the senate. Then two years later, INC was given national recognition thru Republic Act 9645 (Declaring July 27 of Every Year as Araw ng Iglesia Ni Cristo and as Special Working Holiday) which was authored by Senator Miguel Zubiri and approved by President Gloria Macapagal-Arroyo in June 12, 2009.

The observation above may raise further questions such as, “why was this law given priority over other important laws which will benefit the majority?” or “is this law the fruit of INC’s unity vote?”. But such observation perhaps answers the question, “Why Iglesia Ni Cristo endorses candidates during election?